The hotel is in close proximity to the caves of Pinega, one of the longest in European Russia. They are often compared with the caves of Crimea and Perm. Our guides will be happy to guide you through the underground tunnels and secret passages, and tell you all about the nature of the karst landscape.

Golubino Forest Hotel is located on the Pinega River, whose beauty has inspired many poets and writers. Having visited the Pinega River once, you will remember it for the rest of your life: its beauty attracts the eye and captures the heart. A river boat trip is a wonderfully relaxed way of experiencing all the Pinega River has to offer. Admire the beauty of the red rock riverbanks or relax on a sand spit – all that you can enjoy in our hotel.

You can take a leisurely stroll from the hotel, or take a guided tour to the “Holy Spring” waterfall. A subterranean Karjala River, broken free, creates an incredible miracle of nature: a forest waterfall lost in protected parts of taiga. Water temperatures in winter and summer are almost always the same. You can admire the waterfall from a specially equipped platform, or go down closer to dip your hands into the water, which briefly emerges on the surface.

5 km away from Golubino lies the village of Krasnaya Gorka. There, one hundred years ago, was situated one of the most beautiful monasteries of the Russian North, founded in the first half of the seventeenth century. The monastery had housed an icon of the Mother of God of Georgia and one of the first images of the Vladimir Mother of God. Prince Vasily Golitsyn, the chief adviser to Princess Sophia, is buried here. During the Soviet period, the monastery was completely closed down. The Red Mountain offers breathtaking views of the Pinega River Valley.

The county town of Pinega is located 15 km away from the Golubino Hotel. One can talk about Pinega forever! The town is 10 years older than Moscow and Catherine the Great had drawn the layout of the city herself. Here lived the famous Russian storyteller Marya Dmitrievna Krivopolenova. At various times, Prince Golitsyn, writers Alexander Grin and Alexander Serafimovich, and Marshal Voroshilov were sent into exile there. Moreover, the action of Valentin Pikul’s novel “Stars over the marsh” takes place in Pinega. The plot of the book “Nut Buddha” by Boris Akunin also partially centers on a prince in exile and the county town. There is a local history museum and a karst museum in Pinega. The historical buildings of the 19th century have been preserved. End of August, a Pinega Day – a colorful event organized by the Pinega Cultural Center, is being held. 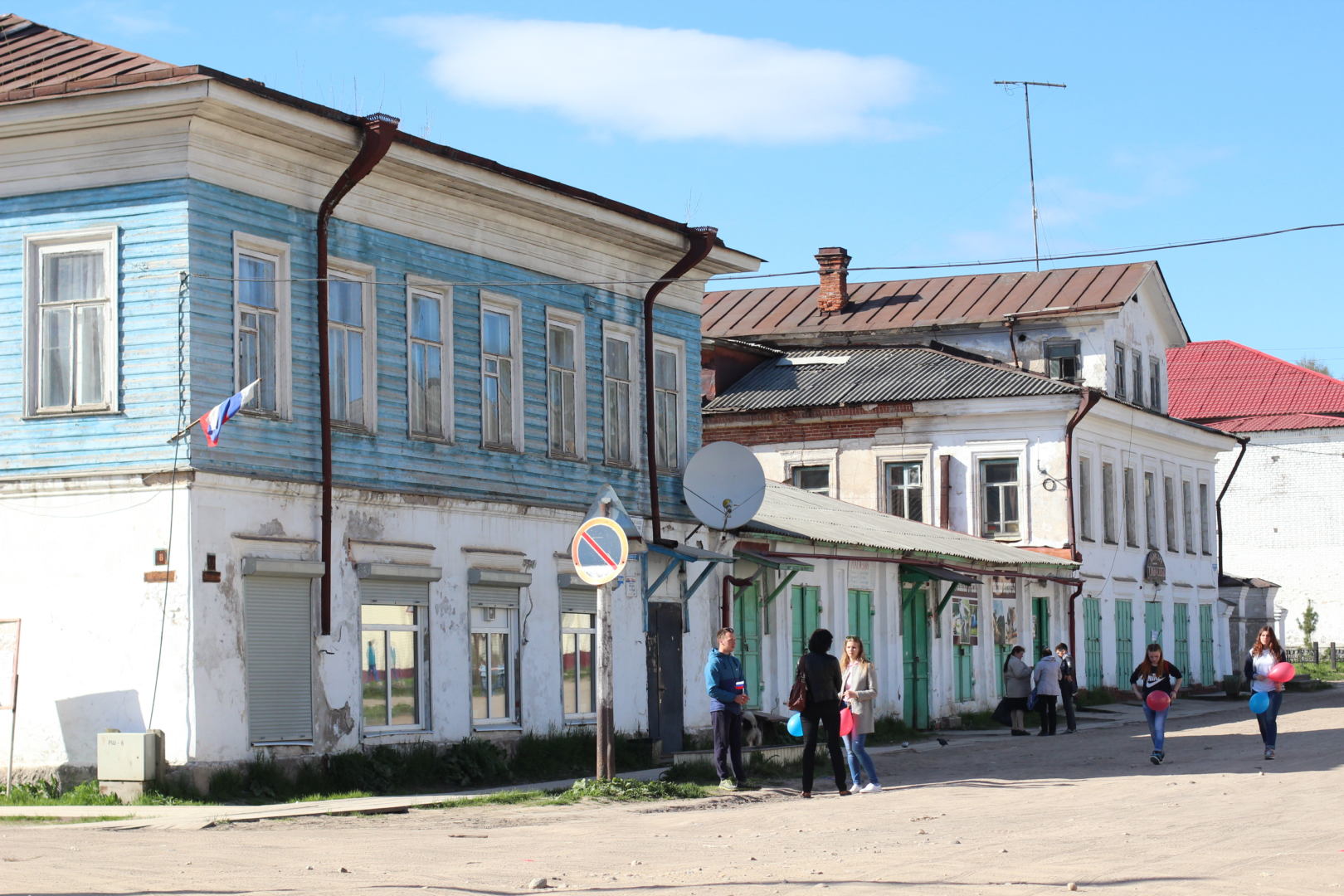 Pinega has its own Museum of Local Lore. Established in the Soviet era as a school museum, it has long outgrown its initial format. The museum possesses an extensive collection of artifacts: ancient books, clothes of previous eras, unique old images of Pinega, artifacts of everyday life and many more. The museum offers an exhibit dedicated to the 30s, which aims to immerse visitors in those terrible years. Recently, interactive exhibitions have become popular. Much attention is paid to the rich merchant family Volodin, who turned Pinega into an economic center at the turn of the XIX and XX centuries. The museum is located in the old merchant building of the Volodin quarter. 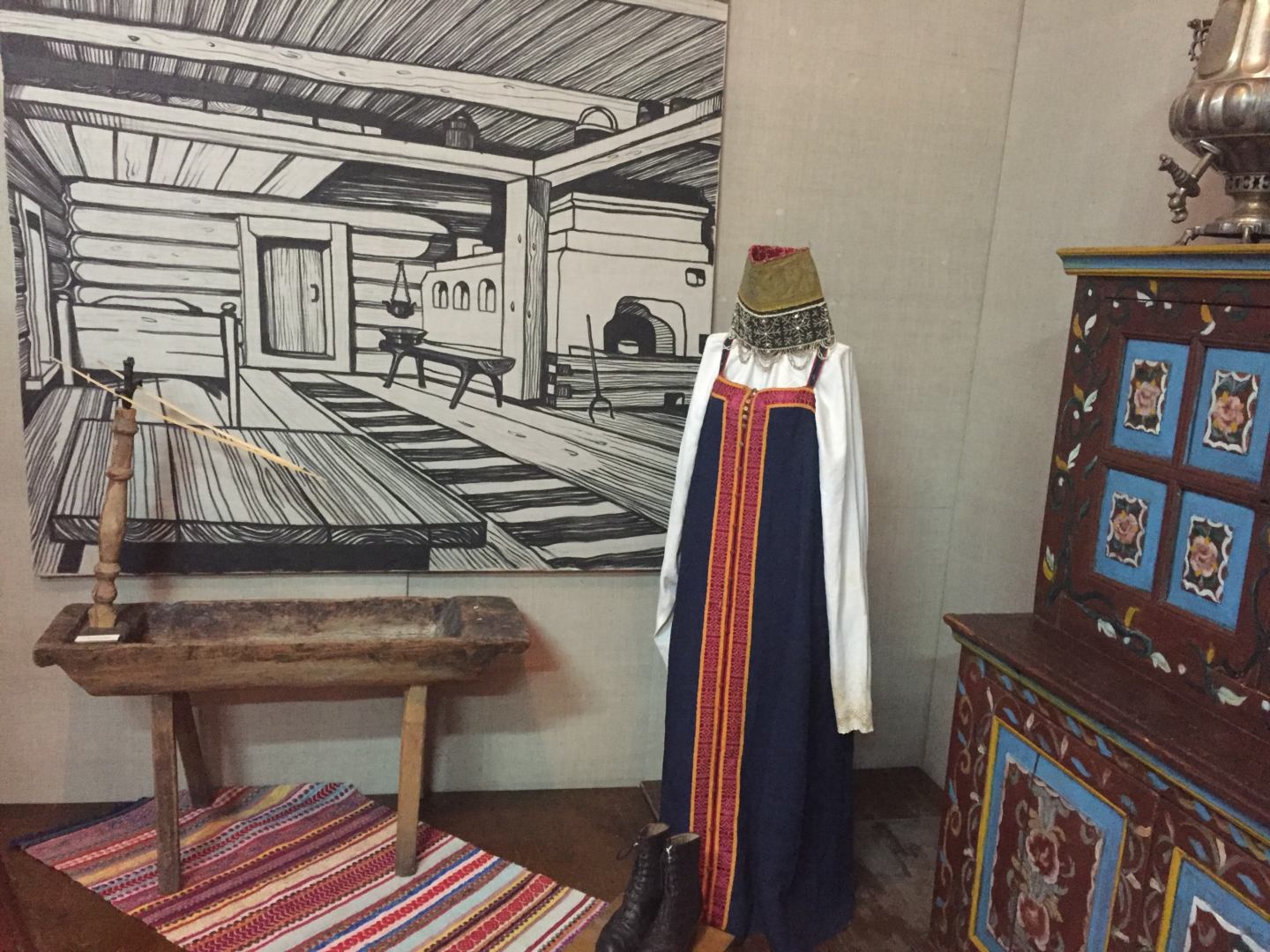 A natural monument of regional significance – the Golubino karst massif is visible to everyone, who arrives in Golubino. After a long ride from Arkhangelsk, along the River Northern Dvina, and then the River Pinega, it may seem like you have entered an entirely different world. Deep canyons, inaccessible cliffs, serpentines – are all part of the Pinega karst, through which the highway was laid out. Pinega also has a Karst Museum. Opened in 2002, the museum was significantly updated in 2013. Here guests can learn about the Pinega karst area and the history of karst studies, get acquainted with some unique samples of gypsum and anhydrite of various colors, dolomites and limestones which typically contain remains of invertebrates, or study rare photographs of karst landscapes and ice caves.

A few kilometers away from Pinega on the picturesque hills along the bed of the Pinega River lies the village of Kulogory. The village has existed for almost five hundred years. The Kuloy canal is located near the village, and the hills on which the village is built, have many karstic caves. In some places, at the foot of the hills, the air flows out of the caves. The entrance to the Kulogorsk Troy, as one of the caves is called, is easy to reach even for unprepared tourists, but you should not go inside if you don’t have any experience and professional equipment. 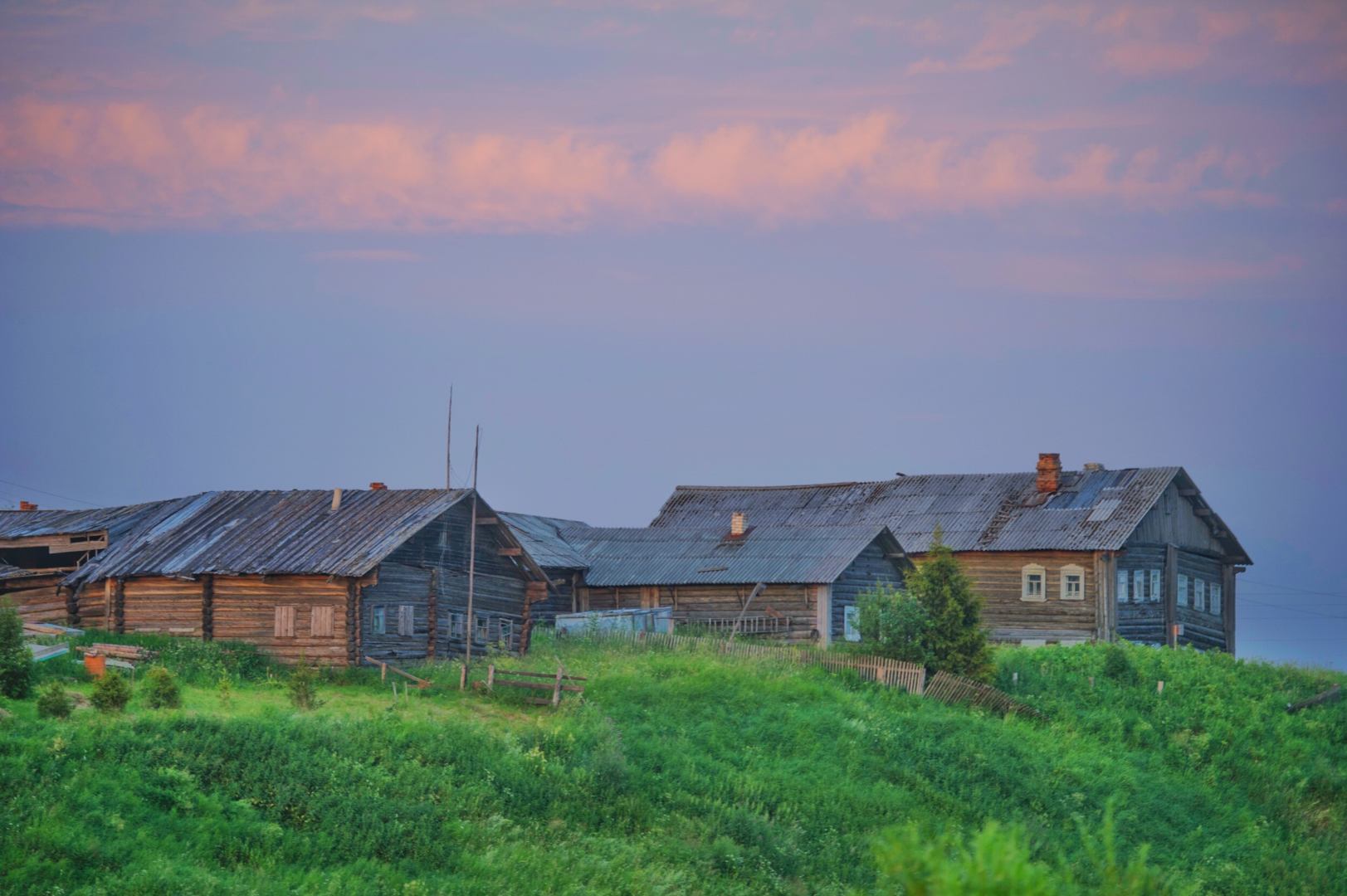 The Kuloy Canal is one of the first hydraulic structures in the history of the USSR. Built in the 20s of the last century, it was created on the site of flooded lakes connected to each other. The canal was to connect the Pinega River and the Kuloy River to facilitate the transport of goods. There is a version that the canal also served the purpose of national defense to transfer equipment and the military to the Mezen Bay of the White Sea. Currently, the gates to the lock chamber are demolished. In summer, the canal nearly dries up, and in the spring, a ferry runs transporting people and vehicles.

North of the Pinega River, in the picturesque taiga, the Sotka River flows – a turbulent stream making its way down the steep cliffs. A thin thread of water in a deep canyon, river spans and rare fish species – are all part of the protected Sotka River, which partially flows across the territory of the Pinega Nature Reserve, where entry is prohibited without special permission. The lower reaches of the river are called Kuloy, which flows into the Mezen Bay of the White Sea.

To embrace nature, to plunge into the beauty of northern taiga and protected northern rivers, to escape the bustle of a busy city – all this you can do by visiting the Golubino Forest Hotel.

Here’s just a small selection of reasons to visit us:

In the midst of winter, the nomadic Nenets, an indigenous people native to Siberia, move reindeer herds from the Arctic to the Mezen and Pinega districts of the Arkhangelsk region for winter. It is warmer here and easier for reindeers to get food from under the snow. Repeating the traditional way of life of their ancestors, the Nenets move gigantic herds of reindeer more than a thousand kilometers across the tundra every year.

In the twenty-first century, they watch satellite TV, and no longer live in yurts, but in modern tents. At the same time, they have a robust and vibrant culture that had survived a turbulent history. Their children learn reindeer herding from a young age and work on an equal basis with adults. In February-March, guests of the Golubino Forest Hotel have a unique opportunity to get acquainted with the life of reindeer herders and, if they are lucky, take part in the Reindeer Festival. These magnificent animals with furry faces, sniffing the pockets of the guests in search of crackers, won’t leave you indifferent! And you get to ride them as well!